skip to main | skip to sidebar

I picked The Double for pretty much one reason, and somewhat silly one at that. We saw Bunny and the Bull at the 2009 festival, directed by The Mighty Boosh veteran Paul King. I saw that this film was directed by Richard Ayoade, who acted in several Mighty Boosh episodes. Decision made. The silly part is that we haven't seen a single episode of The Mighty Boosh.

Ayoade developed the screenplay from the Fyodor Dostoyevsky novel of same name. He updates the story's landscape from Russian bureaucracy to an American company.The lead character, Simon and his Doppelganger James are both portrayed brilliantly by Jesse Eisenberg. Mia Wasikowska plays Simon's love interest, Wallace Shawn easily nails the role as Simon's abusive boss, and Noah Taylor rounds out the headliners as Simon's coworker friend Harris.

Simon is not a man comfortable in his own skin. He has a job, and believes in his value to the company, but is entirely incapable of communicating that belief to anyone else. His day is consumed by people with whom he works disrespecting him: guard at the secured entrance, his boss, even the lady in charge at the copy room. Things worsen when James, Simon's extremely confident doppelganger starts at the company. Everybody loves James, who begins to take credit for Simon's work.

I can best describe the style of the film as "retro futuristic", like someone in the 1950's made a film about the future and got it rather wrong (see Blade Runner and most every movie about the future once The Future rolls around). The film is packed with surreal events, odd humor, paranoia, and a general sense of discomfort. Think early David Lynch, Terry Gilliam, and the like. Ayoade worked extensively with sound designer Adam Armitage to further advance the feeling of other worldliness.

This is not a film for people who like a clear narrative with things neatly wrapping up at the end. We spent a while after the film sharing our ideas about what happened, though neither of us were particularly strong in our beliefs. If you like the occasional quirky challenge, give this film a go. My imdb rating: 7/10.

As an added bonus, I'll leave you with a nugget of the film festival experience. If Ayoade were doing stand-up comedy, I'd say he killed during the film's introduction. Paraphrased gems (from memory, so quite possibly inaccurate): "This film is... 93 minutes long. So there's that. And 7 of those are the credits. So 86, really. It was written... [end of thought]" He was barely more serious for the Q&A after the film, but about as funny. I think we'll track down some of his other works, including (finally) The Mighty Boosh and The IT Crowd. 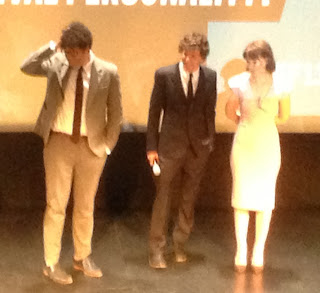 PopUp Film Schedule Calendar (or scroll to bottom of page)

Toronto Weather (See, it's not so cold here)

people had nothing better to do.
details