skip to main | skip to sidebar

As a fan of film, I've been disturbed by a recent trend of showing advertisements before screenings. I'm all for previews and I consider that all part of the theatre experience, but I'm talking about cola, airlines, beer, whatever. I don't know how it is that I'm paying $8.50 for a ticket, $3.50 for a bottle of water, and now I have to sit through an ad, too. But that's not even what has me ruffled. As I was waiting for the beginning of Casino Royale, and a preview for a Rocky comeback movie started, I found myself expecting, or perhaps hoping to see the Energizer Bunny rolling across the screen as part of some wicked joke advertisement. No such luck.

Yes, Rocky is coming back, and not as a coach. From what I understand, the 50-something character, played by the now 60-year old Sylvester Stallone will be stepping back into the ring. Thirty years after Rocky, and 16 years after Rocky V, he's back with Rocky Balboa.

The franchise started in 1976 and released a film in every three years until Rocky V, for which they waited for five years. The extra time was apparently not spent in the script room. Stallone, who has written all the movies, directed II, III and IV. So, perhaps they were waiting on original Rocky director John G. Avildsen to complete that "classic" film, The Karate Kid, Part III. I presume the return of Avildsen was meant to recover some of the spark of the original film. How did it turn out? See my crude imdb rating trend analysis below. 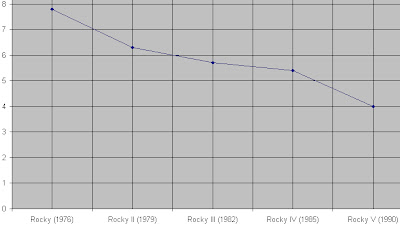 Clearly, there was a tick downward when Avildsen returned to the franchise. Is that his fault? I doubt it. Nonetheless, he won't be around for what has to be the last in the series. Stallone will get to take all the "credit" for this one. And if this film doesn't get any critical acclaim, perhaps Stallone will get some for the next Rambo movie. And, no, by the way, I'm not kidding. These are the movies that make me glad I'm doing this for free, otherwise somebody might make me go see them. I'll sit this one out unless I hear of a miracle Rocky comeback, and not the one that will undoubtedly happen in the movie.
Posted by Sean Sexton at 9:21 AM 1 comment:

Email ThisBlogThis!Share to TwitterShare to FacebookShare to Pinterest
Labels: commentary

The film world was buzzing with horror just a year or so ago. The producers of the forthcoming Bond movie had announced their choice for Pierce Brosnan's replacement, and fans weren't happy about it. They wanted to know what the hell they were thinking, hiring a relatively short (5'11") blond guy to play their hero. Many thought Brosnan (a full 6'1", and dark hair) to be the perfect physical specimen to play Bond, while others argued that it was Sean Connery who was the number one Bond of all time. They all agreed that Daniel Craig was not suitable.

However, I think the producers were trying to get as far away from Brosnan as they could. That surely isn't a slam against Brosnan, but the Bond series needed a push in another direction. It had become a little bit more like a futuristic comic book series lately rather than gritty spy series. Craig, as it turns out, can act, and quite well. Also, as I learned from two female spectators sitting to my left, he's rather nicely built and has a great butt.

The film returns to the beginning, in an obvious move to reset and redefine the on-screen Bond. If it seems like a somewhat familiar move, recall Batman Begins. We get to see Bond gaining his 00 status, making rookie mistakes, falling in love, and learning just what makes a great martini. Some things are kept rather traditional, such as the "Bond women", Eva Green and Caterina Murino.

But this edition of Bond focuses more squarely on the story and rebuilding the character. It keeps moving and keeps you guessing, sometimes not quite correctly as it turns out. And this new Bond still has a sense of humor. You won't forget the torture scene. I know that sounds odd, but you'll understand once you see it.

It's not that the movie isn't flawed. As a poker player, I had to avert my eyes at some of the Texas Hold'em scenes. And, it's clear that the writers are running thin on physical ailments that the villains possess. All things considered, though, I can forgive them. My imdb rating: 8.
Posted by Sean Sexton at 8:04 PM 3 comments:

PopUp Film Schedule Calendar (or scroll to bottom of page)

Toronto Weather (See, it's not so cold here)

people had nothing better to do.
details